My last visits were in Port Moody at Heritage Mountain Elementary yesterday. Beautiful school, with amazing bulletin board displays and attentive kids who were keen to participate. 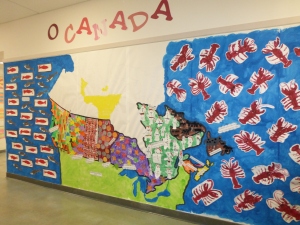 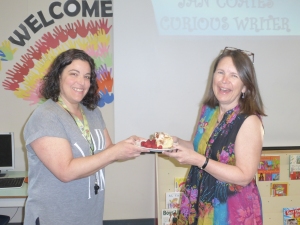 Angie (librarian, resource teacher, track coach) who coordinated my visit, was incredibly organized, including offering the coffee break snack in the pic.

When I was finished, I had to bolt and drive into downtown Vancouver to return the rental car. Vancouver isn’t nearly as intimidating for driving as I expected, but of course I was going downtown while everybody else was leaving. I did have to spiral down underground 7 floors to return the car…

I’m renting an apartment for the weekend, and my childhood best friend, Brenda, is coming over from Calgary! It’s going to be sunny and 25 degrees, so who knows what we’ll get up to…

View from the apartment

Last night I had dinner with some Vancouver children’s writers: Maggie de Vries, Carrie Mac, Stacey Mattson and Kali George – and then we went to hear Jacqueline Woodson (BROWN GIRL DREAMING) read/speak as organized by the Vancouver Children’s Literature Roundtable. She spoke about the necessity of kids’ books being both mirrors for kids, and also windows – they need to see themselves reflected, but also have an opportunity to see into worlds outside their experience. I chatted with her briefly after, and she signed my copy of BROWN GIRL DREAMING (which has three stickers on the cover – Newbery Honor Book, Coretta Scott King winner and National Book Award winner). 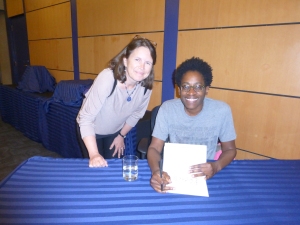 She was super friendly, but tired from speaking to kids all day (uh-huh!), wanted to know my full name and graciously wrote: “So psyched for your words in the world!”

What a week! And so my first TD Book Week tour is officially over. I had no idea it would be so much fun! And I only got lost twice (ten minutes each time). But really it was all about the kids I met – some final words from one of them. Thanks for touring with me!

9 comments for “Phew! and Jacqueline Woodson!!”