I know all the lyrics to several Harry Chapin songs, mainly because they were an important part of my growing-up years, I suppose, that angsty trying-to-figure-yourself-out time. I got to see him in concert in Halifax shortly before he died. Most often I can’t even remember song titles, let alone lyrics – you know what I mean? But his, I remember.

Part of the reason his songs are memorable is because they tell lyrical stories; they have a beginning, middle and end, something all writers value, and he created very real characters, made us care about their lives. I sometimes wish I was musical; it must be so fulfilling to put words to music and be able to sing your stories. I read somewhere that Cat’s in the Cradle, Harry’s 1974 hit, made more fathers feel guilty than any other song – not sure if that’s a good or bad thing, but like so many,  I love the song, for its tune and its message.

One of Harry’s brothers, Steve, owns a campground on Nova Scotia’s south shore, and each year for the past 30 he has hosted the Chapin Family Concert. Brother Tom (who does excellent music for kids and their adults – I know a lot of his lyrics from playing his tapes for my kids back in the day) and his now-grown daughters, The Chapin Sisters, various local musicians, and Jen Chapin, Harry’s daughter and New York jazz singer, sing, jam and entertain. I can’t remember when I’ve spent such a pleasant afternoon, singing along with a couple of hundred other people in the middle of a grassy field near the ocean in the sunshine. That’s Jen with one of Harry’s grandsons on the right – I wonder if he has, or ever will have, any idea of the far-reaching effects of his grandfather’s music? And I wonder how many more amazing songs Harry could have given us if he hadn’t died at 39… 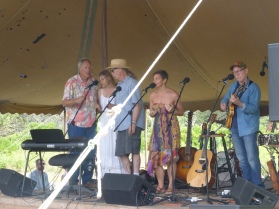 It seems like I’ve been here before;
I can’t remember when;
But I have this funny feeling
That we’ll all be together again.

No straight lines make up my life,
And all my roads have bends;
There’s no clear-cut beginnings;
And so far no dead-ends.  Harry Chapin, Circle (my favorite lines of his)

2 thoughts on “Harry Chapin – Thanks for the Stories”