I was looking through some of my mother’s things the other day, in particular a gold damask clutch full of letters and telegrams exchanged between my parents and

grandparents as Mum and Dad were about to get married – in a hurry as was often the case in those days… 1957. More than fifty-seven years ago. That’s Nana and Gramps Mingo in the picture – aren’t they cute?

Each of their voices came across so loud and clear in their writing – it was almost as good as having a video or audio recording, yet they’re only words on paper. So I got to thinking – where is that kind of record being kept these days?

Texts, email, phone calls/messages –  all are either deleted or forgotten about as soon as they’ve been read/heard. Seems  correspondence we keep and re-read is yet another casualty of our disposable world. Nothing lasts forever these days – coffee makers, stoves, fridges, washers, dryers, clothing, even pictures, and, sadly, lasting, honest person-to-person communication – ie. letters.

As authors, we infuse our fiction with lots of emotional detail from our real lives; our books will live on after we’re gone, but it’s not at all the same as writing a straight-

from-the-heart note to somebody. It doesn’t take long to dash one off; on the rare occasion I write a letter, I often type it, simply because my handwriting is so atrocious – even Don can barely read my grocery lists.

I suppose the Internet was supposed to put an end to paper, but that hasn’t kept my filing basket from filling up with meaningless stuff. I’d prefer letters. Last week, I spent ten minutes digging up an address, then another ten writing a letter to legendary kids’ author, Patricia MacLachlan, whose work I’ve admired for years. Her book, Edward’s Eyes, is so incredibly perfect that I had to tell her. 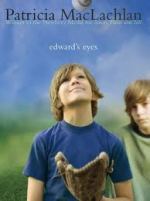 I wonder if she’ll write back to me…

I miss getting letters, and I’m happy I’ve hung onto some old favourites – it’s so lovely to hear people’s voices long after they’ve died. Don’t you agree?

10 thoughts on “Voices from the Past – Deleted?”